All those "real" mechanicus minis! 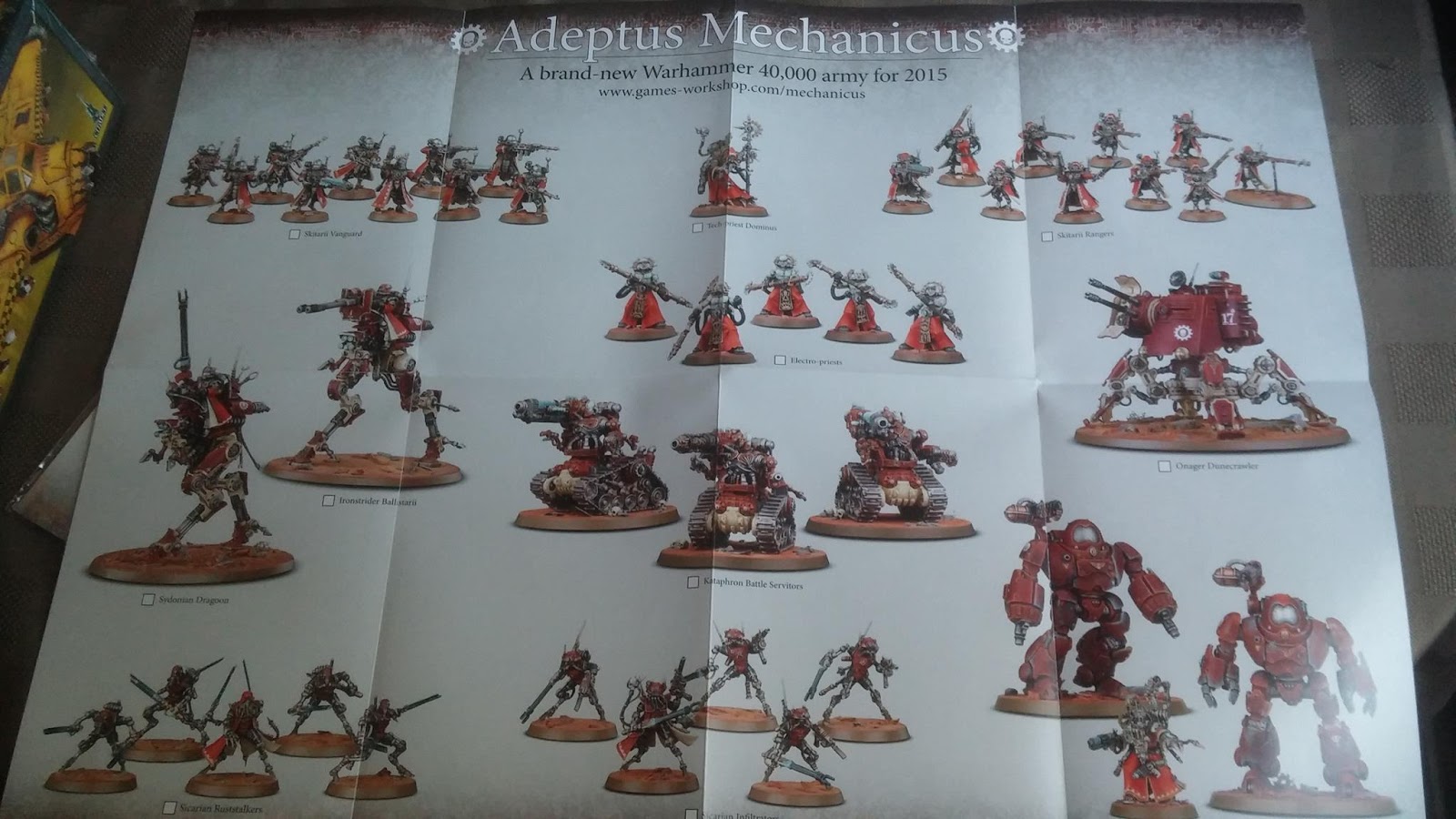 When I started this blog a couple of years back, it was with the aim of sharing all the customised AdMech minis I had so many ideas for. Now GW is ruining all that be releasing tons of model - and really impressive ones even. So what to do? Should I just go with the legal minis now and is this the end of the converting/blog, since everyone can have AdMech now! Well for a few seconds I thought that, but the released models cannot but stir up a fuss in an old Mechanicus lover, and now the next wave is hitting us I just keep getting impressed. Though I do not game much I still like to build around a codex, just for the occational game - so I also worried a little that none of my already made models would be of any use. However when looking at the poster above, I see quite a few uses for my old models - though I miss a few, and think that GW will add even more units. Especially sagittarii, praetorians, servitors and weapon platforms are missing in my book.
So what do I think of these new models? Well generally I'm very impressed, there is a few things that need changing though. Luckily one would say, because if I had nothing to convert and improve I think interest would be lost momentarily.

Vanguard: almost insanely impressive kit, with detailing that just takes the breath away. I like these as basic infantry, not a fan of robes though, as in my book red robes are for the priesthood. Already have few ideas how this can be improved. Guns need a bit of spiffing-up as well.

Rangers: Again I don't see robes a classical cannonfodder guy equipment, but given they are rangers it makes some sense, and I'll keep them, never painting them red though. The guns are awesome.

Elektro priests: Never really warmed up the idea of elektro-priests, but I have to admit I really like he look of these models, great potential.

Tracked guys: Until I see the in the flesh they will simply be designated: awesome!

Big robot: These seem to have taken quite a bit of heat in the first couple of days, generally being really unliked. Sure there is few things that need cutting and gluing, but they carry great potential as well. I agree the model looks lees impressive that most of the others, but I think that's because of the paintjob, which IMO doesn't really look finished. A colorscheme with just red all over? Come on Eavy metal, when was the last time you did that? Luckily I think they can be grim-darked quite easily.

Ruststalkers: Those I really like, menacing evil looking buggers. Much like the nazi in Hellboy, spidery and nightmarish - super cool. Tons of bits straight for the bitsbox too.

Sicarian Infiltrators: Not as huge fan of the kit when used for these. I kind of suspect that's it due to the way the are assembled in the pics though. Looks extremely unstable and ramshackle. I don't like. Doesn't fit an infiltrator. If those poses cannot be optimised, I'll be looking for leg replacements for these guys.

Dunewalker: Like the mini, lots of possibilities, but again I think the paintjob let's it down. That bonecolor will never be a friend of mine.

Strider: This is a weird piece too. Great and strange though, cannot really clarify why I like it - but I'm really looking forward to seeing some dark muted colors on this too.